"I have enough for myself, but if I stop work, I have not enough for others." 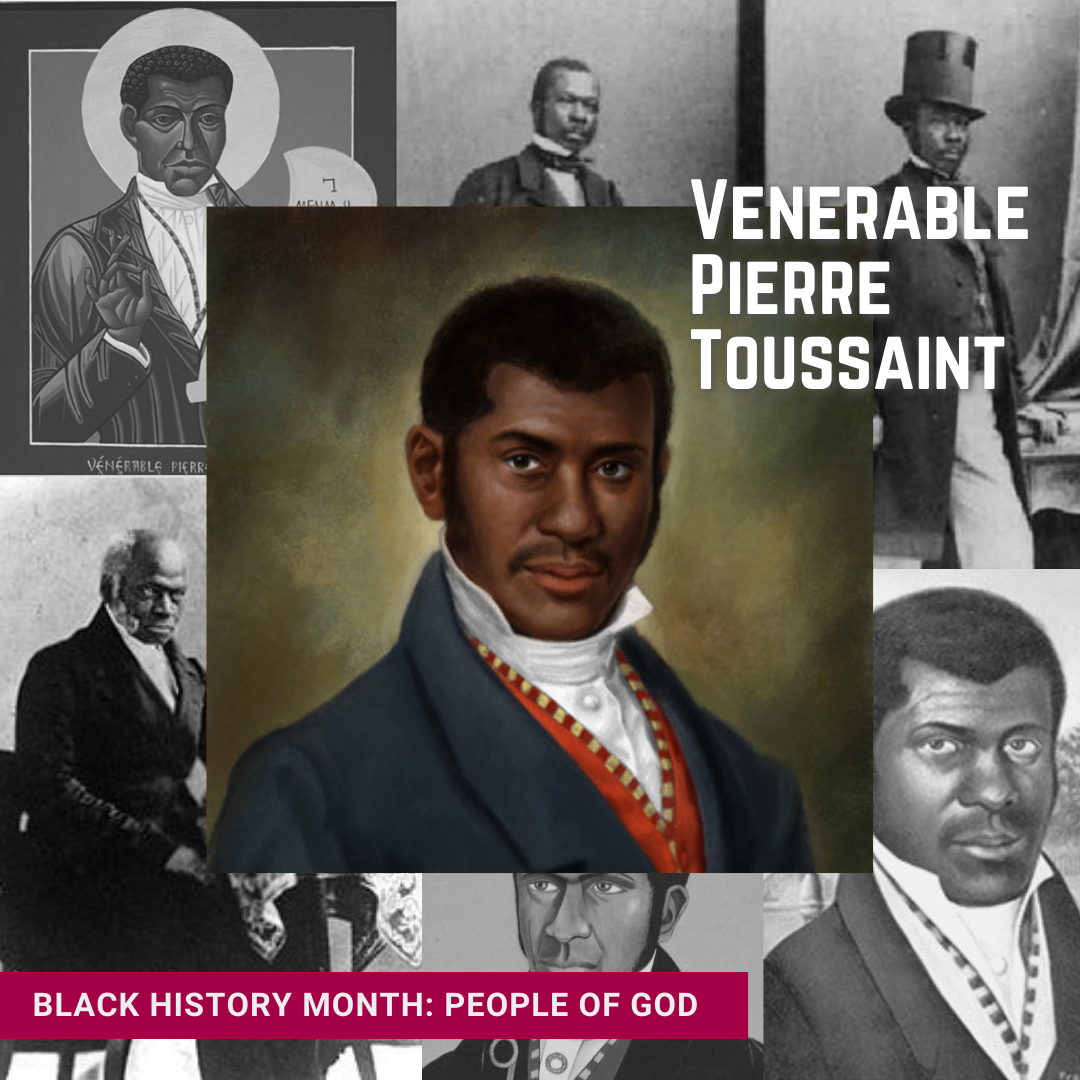 Pierre Toussaint was born a slave in 1766 in the French colony of Saint Domingue, which is modern-day Haiti. His great-grandmother had been born in Africa and sold into slavery in the Caribbean. Pierre worked as a house slave inside a plantation owned by Jean Berard and was educated by the family’s tutors, which was very unusual for the time, and was even allowed access to the family library, where he encountered classic Catholic works such as The Imitation of Christ - his favorite book.

When political unrest came to the island, his master sent his wife to New York for safekeeping in 1787, taking five of their slaves with them, including Pierre and his sister, Rosalie. There in New York, Pierre was allowed to train as a hairdresser, as an apprentice to one of New York's leading hairdressers. He learned the profession quickly, and over time he became “the fashionable coiffeur of the day.” He earned his own money, and when his owner’s family fell on hard times, he used that money to take care of them. Madame Berard promised to free him when she died, which she did in 1807, when Pierre was 41. At that time, Pierre took the surname of "Toussaint" in honor of the hero of the Haitian Revolution which established that nation.

As Pierre’s clientele grew, he became one of New York’s foremost black entrepreneurs. He bought a house in downtown Manhattan, invested in real estate and banks, and used his money to pay for his sister Rosalie's freedom. Although comfortably set, he still worked well into old age. “I have enough for myself,” he said, “but not enough for others.” Helping others, regardless of ethnicity, was a constant theme in his long life.

A devout Catholic, Pierre attended the morning Mass at St. Peter’s Church for over 60 years. On August 5, 1811, Toussaint married Juliette Noel after purchasing her freedom. A benefactor of the Catholic Orphan Asylum, he and his wife sheltered orphans and fostered numerous boys in succession. Toussaint supported them in getting an education and learning a trade; he sometimes helped them get their first jobs through his connections in the city. In several cases, he purchased freedom for slaves, including his own relatives. In 1815, Nicolas and his wife moved to the American South. Together, the Toussaints began a career of charity among the poor of New York City, often taking baked goods to the children of the Orphan Asylum and donating money to its operations.

The Toussaints also organized a credit bureau, an employment agency, and a refuge for priests and needy travelers. Many Haitian refugees went to New York, and because Toussaint spoke both French and English, he frequently helped the new immigrants. He often arranged sales of goods so they could raise money to live on. He was "renowned for crossing barricades to nurse quarantined cholera patients" during an epidemic in New York.

Toussaint was one of New York’s most respected citizens, and contemporaries recalled his “innate sense of personal dignity,” “his exquisite charity and consideration for others,” and “his tender compassion for all.” One woman stated:

“I saw how uncommon, how noble, was his character. It is the whole which strikes me when thinking of him; his perfect Christian benevolence, displaying itself not alone in words, but in daily deeds; his entire faith, love, and charity; his remarkable tact, and refinement of feeling; his just appreciation of those around him; his perfect good taste in dress and furniture—he did not like anything gaudy and understood the relative fitness of things.”

Nevertheless, Toussaint was no stranger to racism. Even in old age, he walked to clients’ homes, since he was banned from riding the horse-cars. Neither were churches immune from prejudice. On one occasion, an usher refused him a seat at Old St. Patrick’s Cathedral, of which he was a major benefactor and aided in its original construction. White Catholics, unintentionally patronizing, meant to praise him by calling him a “Catholic Uncle Tom.”

As Toussaint aged, he continued his charity. At his death, his papers included records of his many charitable gifts to Catholic and other institutions; friends and acquaintances lauded his character. He was "one of the leading black New Yorkers of his day," but his story became lost to history.

On June 30, 1853, Pierre died at age 87. At his funeral Mass at St. Peter’s, many of the attendees, a biographer writes, had “eyes glistening with emotion.” In his sermon, Father William Quinn noted:

“Though no relative is left to mourn for him, yet many present feel that they have lost one who always had wise counsel for the rich and words of encouragement for the poor. And all are grateful for having known him . . . There were very few left among the clergy superior to him in devotion and zeal for the Church and for the glory of God; among laymen, none.”

In 1991, Cardinal John J. O’Connor introduced Pierre’s canonization cause, and he was reinterred at the new St. Patrick’s Cathedral (the only layperson so honored). During his visit to St. Patrick’s, Pope John Paul II declared Pierre Venerable. Cardinal O’Connor himself considered it “a great privilege” to be buried alongside Pierre. From slave to entrepreneur, a benefactor and friend of the poor, O’Connor added: “If ever a man was truly free, it was Pierre Toussaint.”