"The Catholic Church deplores a double slavery – that of the mind and that of the body.  She endeavors to free us of both." 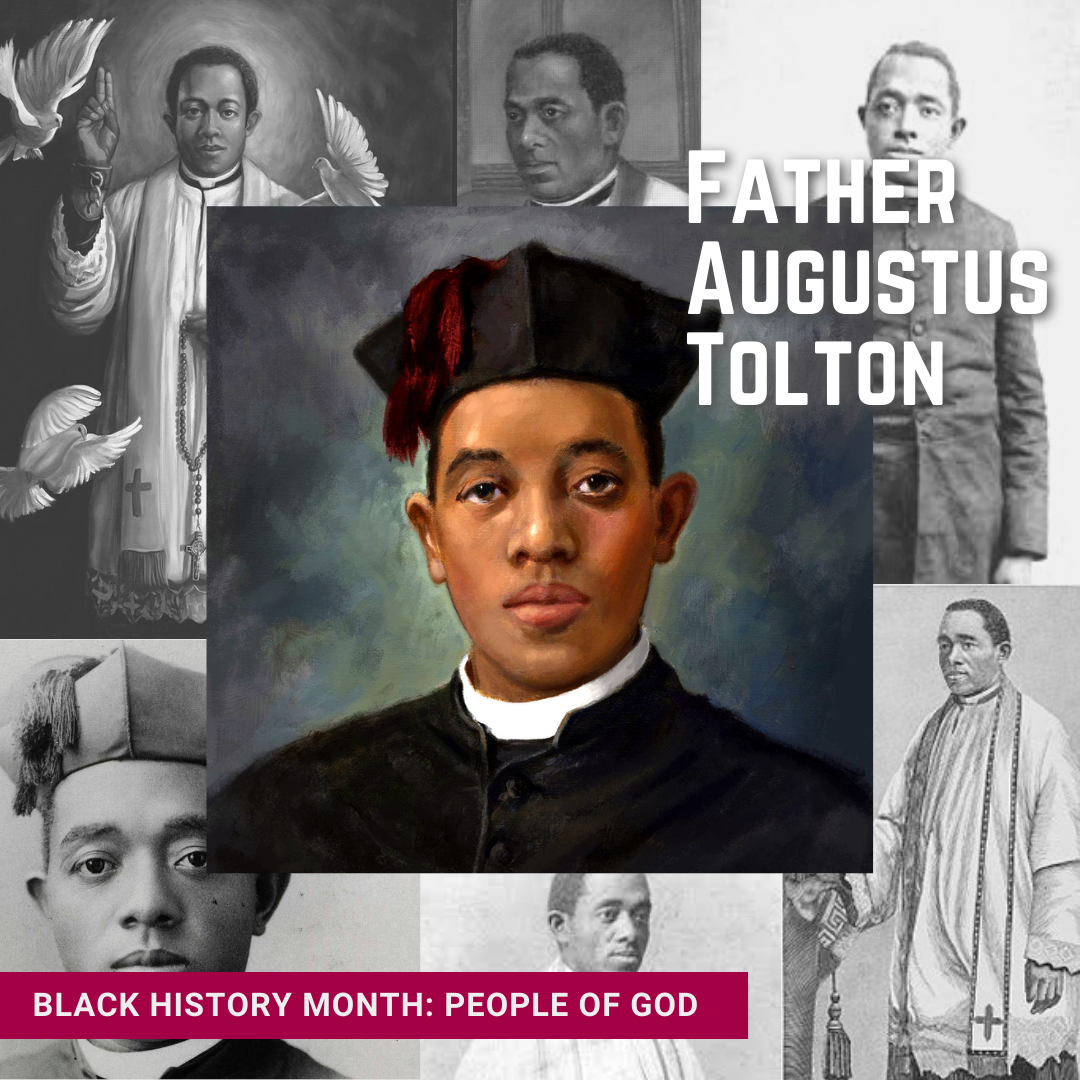 Born in Brush Creek, Missouri on April 1, 1854, John Augustus Tolton began life with the odds stacked against him. He began life without his God-given rights of freedom, dignity, and equality; he began life as someone’s personal property - as a slave of a white Catholic family.

Augustus Tolton’s early childhood coincided with the Civil War; his father, Peter Paul Tolton escaped slavery to join the Union Army while his mother, Martha, remained the maid of her owners. Augustus Tolton was raised in the Roman Catholic Church; his mother was baptized Catholic because her owners were of the Catholic faith.

Despite adversities, human cruelties, and hatred by his fellow man, Augustus Tolton had the love of Jesus Christ in his heart. In 1862, he and his family found the courage to escape slavery by bravely crossing the Mississippi River into Illinois. According to one report, when they reached freedom, Tolton’s mother turned to him and said, “John, boy, you’re free. Never forget the goodness of the Lord.”

Even though racial conflict haunted Tolton most of his life, he remained devoted to service in the Catholic Church. With the blessing of a loving man of God, Fr. Peter McGirr, Tolton was allowed to attend St. Peter’s Catholic School, an all-white parish school in Quincy, Illinois. Fr. McGirr and others mentored and tutored him as they began to realize that Tolton was destined to greatness.

Augustus Tolton devoted himself to serving God by making his life a living example of God’s words. Unfortunately, no American seminary would accept a black man. Without allowing his faith in the Lord to falter, Tolton graduated from high school and Quincy College. In 1880, with Fr. McGirr’s continued support, Augustus began his studies for the priesthood in Rome.

In 1886, after six years of study in the seminary, Tolton was ordained to the priesthood in Rome at the age of 31. His first public Mass was in St. Peter's Basilica on Easter Sunday in 1886. Augustus Tolton blazed a trail while following God’s calling. He learned to speak fluent English, German, Italian and Latin, Greek, and African dialects. Expecting to serve in an African mission, he had been studying its regional cultures and languages - instead, he was directed to return to the United States to serve the Black community. Fr. Augustus Tolton became the first Black American priest in the United States of America. Tolton held his first public Mass at St. Boniface church in Quincy, Illinois, and eventually became pastor of St. Joseph Catholic Church and school.

Racial tension in Quincy still ran rampant and Father Tolton accepted a reassignment to Chicago in order to fulfill his calling to serve God. Tolton's success at ministering to Black Catholics quickly earned him national attention within the Catholic hierarchy. "Good Father Gus", as he was called by many, was known for his "eloquent sermons, his beautiful singing voice, and his talent for playing the accordion.” He gave service by helping the poor and sick and feeding the hungry. His endless, tireless and devoted work led many to the Catholic Faith.

At the age of 43, on July 8, 1897, Father Tolton collapsed and died the following day at Mercy Hospital as a result of the heatwave in Chicago in 1897. After a funeral that included 100 priests, Tolton was buried in the priests' lot in St. Peter's Cemetery in Quincy, Illinois.

Tolton’s legacy lives on through publications (Tolton is the subject of the 1973 biography From Slave to Priest by Sister Caroline Hemesath), educational facilities opened in his name (the Augustus Tolton Pastoral Ministry Program, the Father Tolton Regional Catholic High School in Columbia, Missouri, and Augustus Tolton Catholic Academy in Chicago Illinois), and is currently on the road to beatification.

On March 2, 2010, Francis George of Chicago announced that he was beginning an official investigation into Tolton's life and virtues with a view to opening the cause for his canonization. This cause for sainthood is also being advanced by the Diocese of Springfield, Illinois, where Tolton first served as a priest, as well as the Diocese of Jefferson City, Missouri, where his family was enslaved. On June 12, 2019, Pope Francis authorized the proclamation of a "Decree of Heroic Virtue", advancing the cause of Servant of God Augustine Tolton. With the proclamation of the decree of heroic virtue, Tolton was granted the title “Venerable”. The next stage would be beatification, followed by canonization.