“Seeing the sun, the moon, and the stars, I said to myself, “who could be the master of these beautiful things?” 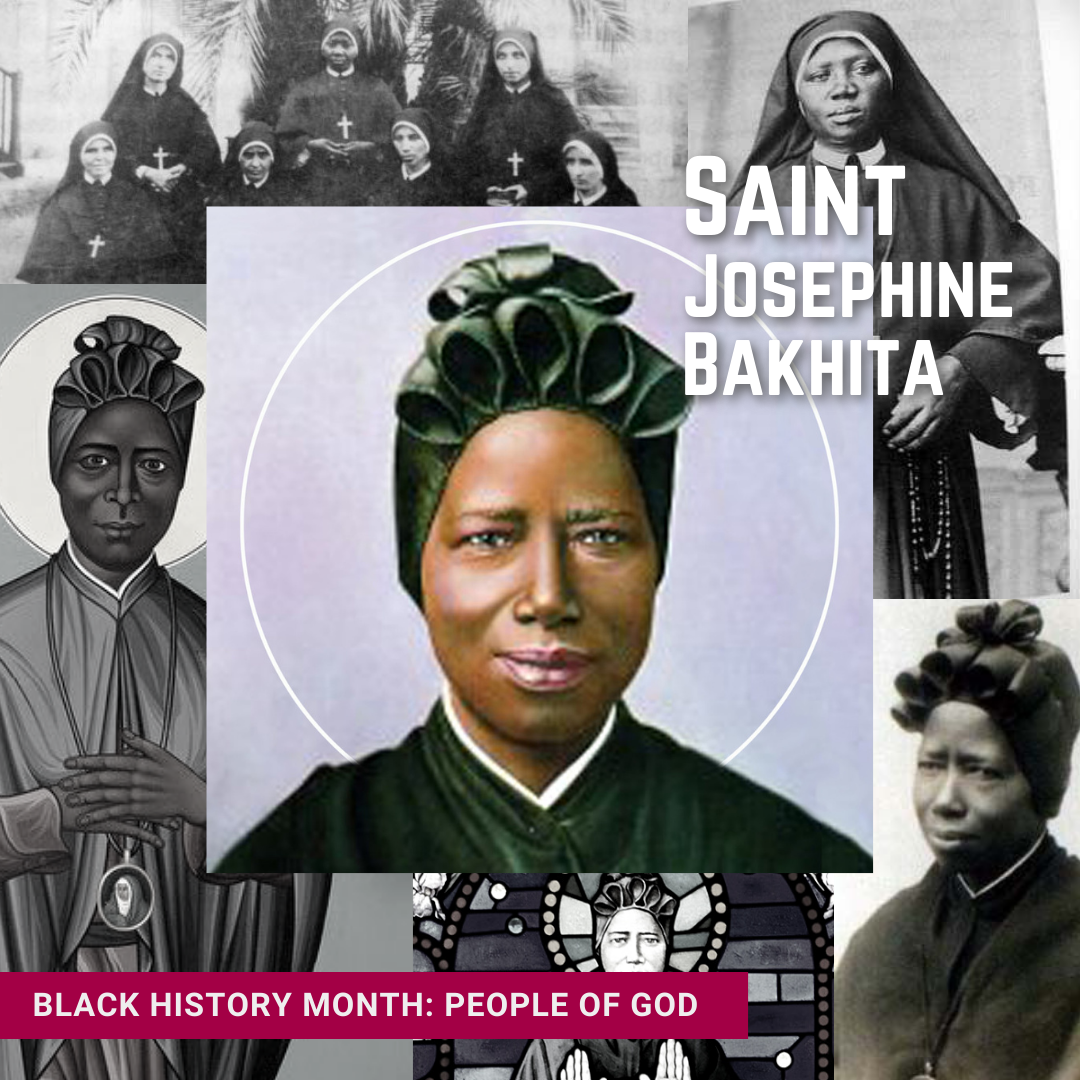 Saint Josephine Margaret Bakhita was born around 1869 in the village of Olgossa in the Darfur region of Sudan. She was a member of the Daju people and her uncle was a tribal chief. Due to her family lineage, she grew up happy and relatively prosperous, saying that as a child, she did not know suffering.

Josephine Bakhita was kidnapped at the age of nine and sold into slavery in her native Sudan, experiencing the moral and physical humiliations associated with slavery. Although she was just a child, she was forced to walk barefoot over 600 miles to a slave market in El Obeid. She was bought and sold at least twice during the grueling journey.

For the next 12 years, she would be bought, sold, and given away over a dozen times. She spent so much time in captivity that she forgot the name her loving parents gave to her, instead taking the name her slave traders called her, Bakhita, which translates to "fortunate" or "lucky".

In 1882 she was bought for the Italian Consul and eventually found a new life in Italy, where she was placed in the custody of the Canossian Sisters in Venice while her mistress traveled to Sudan. While she was in the custody of the sisters, she came to learn about God. According to Josephine, she had always known about God, who created all things, but she did not know who He was. She was deeply moved by her time with the sisters and discerned a call to follow Christ.

When her mistress returned from Sudan, Josephine refused to leave. Her mistress spent three days trying to persuade her to leave the sisters, but Josephine remained steadfast. This caused the superior of the institute for baptismal candidates among the sisters to complain to Italian authorities on Josephine's behalf. The case went to court, and the court found that slavery had been outlawed in Sudan before Josephine was born, so she could not be lawfully made slave. She was declared free.

For the first time in her life, Josephine was free and could choose what to do with her life. She chose to remain with the Canossian Sisters.

She was baptized on January 9, 1890, and took the name Josephine Margaret and Fortunata. (Fortunata is the Latin translation for the Arabic name Bakhita). The Archbishop who gave her the sacraments was none other than Giuseppe Sarto, the Cardinal Patriarch of Venice, who would later become Pope Pius X.

Josephine became a novice with the Canossian Daughters of Charity religious order on December 7, 1893, and took her final vows on December 8, 1896. She was eventually assigned to a convent in Schio, Vicenza.

For the next 42 years of her life, she worked as a cook and a doorkeeper at the convent. She also traveled and visited other convents telling her story to other sisters and preparing them for work in Africa.

She was known for her gentle voice and smile. She was gentle and charismatic, and was often referred to lovingly as the "little brown sister" or honorably as the "black mother."

During World War II, the people of the village of Schio regarded her as their protector. And although bombs fell on their village, not one citizen died.

In her later years, she began to suffer physical pain and was forced to use a wheelchair. But she always remained cheerful. If anyone asked her how she was, she would reply, "As the master desires."

On the evening of February 8, 1947, Josephine spoke her last words, "Our Lady, Our Lady!" She then died.

In 1958, the process of canonization began for Josephine under Pope John XXIII. On December 1st, 1978, Pope John Paul II declared her venerable. The news of her beatification in 1992 was censored in Sudan, but just nine months later, Pope John Paul II visited Sudan and honored her publicly, "Rejoice, all of Africa! Bakhita has come back to you. The daughter of Sudan sold into slavery as a living piece of merchandise and yet still free. Free with the freedom of the saints."

In October 2000, Josephine Bakhita was canonized by Pope John Paul II, at which point he noted that “in St. Josephine Bakhita we find a shining advocate of genuine emancipation. The history of her life inspires not passive acceptance but the firm resolve to work effectively to free girls and women from oppression and violence, and to return them to their dignity in the full exercise of their rights.”

Josephine Bakhita is the patron saint of Sudan and human trafficking survivors, and her feast day is celebrated on February 8.

St. Josephine Bakhita, you were sold into slavery as a child and endured untold hardship and suffering.

Once liberated from your physical enslavement, you found true redemption in your encounter with Christ and his Church.

O St. Bakhita, assist all those who are trapped in a state of slavery;

Intercede with God on their behalf

so that they will be released from their chains of captivity.

Those whom man enslaves, let God set free. Provide comfort to survivors of slavery and let them look to you as an example of hope and faith. Help all survivors find healing from their wounds.

We ask for your prayers and intercessions for those enslaved among us.